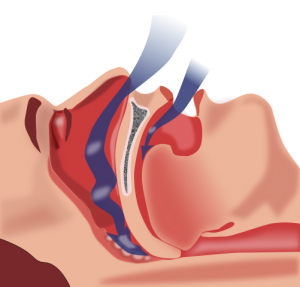 Sleep apnea is one of the stealthier conditions that exists, basically because of the fact that it occurs only when you are asleep. However, the effects of sleep apnea extend beyond waking up. In fact, if you’re perpetually tired, it may be due to sleep apnea. The problem with sleep apnea is that it isn’t as easily diagnosed as dental conditions such as gingivitis or tooth decay. However, if you suspect that you may have sleep apnea, Dr. Clifford C. Compton III of Concord Dental Services may just help you get back your normal breathing and sleep patterns.

What is sleep apnea?

Sleep apnea is a condition wherein you stop breathing for a couple of seconds to even minutes at a time while you are asleep. This sleeping disorder has two known causes but it’s the obstructive form of the disease which your dentist is concerned about. The reason for why obstructive sleep apnea develops is because of the fact that the loose tissues around your esophagus cave in to block your airways and keeping you from getting the proper amounts of oxygen to your lungs.

What are the signs of sleep apnea?

Because sleep apnea episodes happen while you are sleeping, this means that you can rarely catch yourself experiencing an episode. However, if you sleep next to someone, then it’s possible for that person to notice some common signs of individuals who suffer from sleep apnea. For instance, snoring is a common sign of having sleep apnea. The snoring could be so loud that it wakes up persons sleeping next to you or even yourself. It’s also common for individuals with sleep apnea to be awakened suddenly and feeling like someone just choked you.

Some symptoms of sleep apnea, which you may notice yourself include excessive sleepiness, especially during the daytime, difficulty in concentrating and mood changes. All of these things have to do with the fact that you have been deprived of oxygen while you were sleeping. This means that despite the fact that you are sleeping, you aren’t really resting properly.

How can your dentist help you with your sleep apnea?

Obstructive sleep apnea is due to the caving in of tissues which ultimately block your airways and keep you from getting the oxygen which you need. For this reason, the best way to treat your sleep apnea is to make sure that these tissues are kept from sagging down. Doctors suggest that weight loss is an effective and permanent solution to your sleep apnea problem. However, losing weight is not something which you can successfully do on a whim.

On the other hand, wearing a night appliance inside your mouth will ensure that tissues can be cleared of of your airways and allow you to breathe properly while you are sleeping. Dr. Compton offers the SumnoDent MAS oral appliance to help you do just that, and unlike other dental practices in South Concord, NC, Dr. Compton actually makes use of the oral appliance that he endorses and is ready to personally attest of its effectiveness.