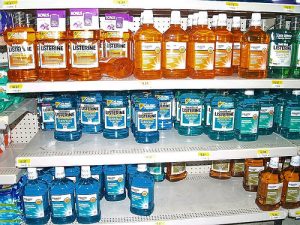 There are several different brands of mouth wash or mouth rinses available in stores which cater to the different needs of consumers. Choosing the right mouth wash for you is important in order to clean your teeth while preventing any irritations in the mouth.

Majority of mouthwash products also contains high levels of alcohol which is used to kill bacteria. Alcohol in the mouthwash is responsible for the cooling effect, which creates that “clean” feel. There are several issues against the presence of alcohol in mouthwashes. Most mouthwashes are known to have high concentrations of alcohol, levels that may cause problems in passing breathalyzer tests that determine DUI. There are several claims that usage of alcohol based mouthwashes may be the cause of increased levels of the controlled substance in the mouth, hence a person can falsely fail a breathalyzer test. Consequently, several mouthwash products have been used to get people drunk and are sold with restrictions.

Alcohol-based mouth rinses can also increase your risk of having bad breath. This is because alcohol can evaporate water inside your mouth, hence decreasing saliva content, and producing symptoms of a dry mouth. Having a dry mouth is a known cause of halitosis. Some people experience irritations when they use alcohol-based mouthwash, producing red gums and prompting known signs of hypersensitivity including fatal anaphylactic reactions.

Choosing the right mouth wash in important. Try to test a small amount of the product you’re eying and see if your mouth produces signs and symptoms of allergy. Avoid buying products which induce any adverse reaction on you. Lastly, always look for the seal of approval from the official dental association of your country.